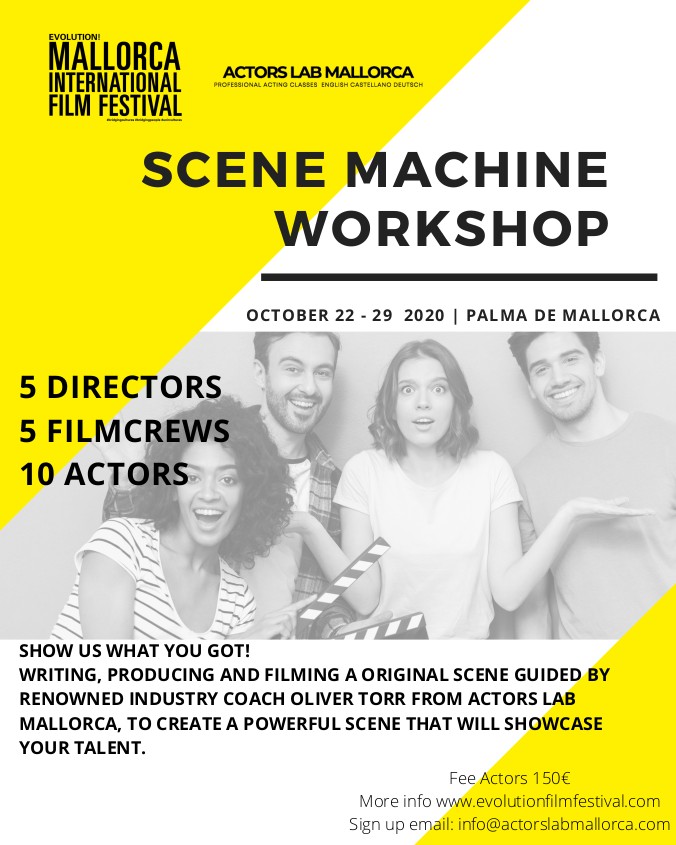 Two days to workshop the scene, two days to shoot, your director will edit the scene and it will be screened at the festival in front of an audience and jury! The scene will be screened as part of the film festival in front of an audience and previous screenings were shown to top-class jury members. Previous jury members include; Florian Gottschick (Dir. Fucking Berlin), Dan Sefton (Mallorca Files show runner) and Melissa Leo (Oscar winner – The Fighter).

The scenes are all original and will be tailored to the actor. Scene Machine is about showcasing the actor, director and cinematographer’s best work.

This is a brand new workshop where emerging actors, directors and cinematographers get to take part in a festival workshop and have their work screened for an audience. It will be an intense experience for all involved, but we are looking forward to seeing what is possible in six days!

We are taking applications from

It’s going to be awesome. Evolution film festival is a brilliant place to meet other filmmakers as the atmosphere is much more relaxed. Producers, directors and screenwriters from across Europe are all taking part in round-table events which means networking and meeting other collaborators is actually fun – (also being on the big screen during the festival is a real plus.)

For more info click the link below – english or spanish. Or email at info@actorslbamallorca.com